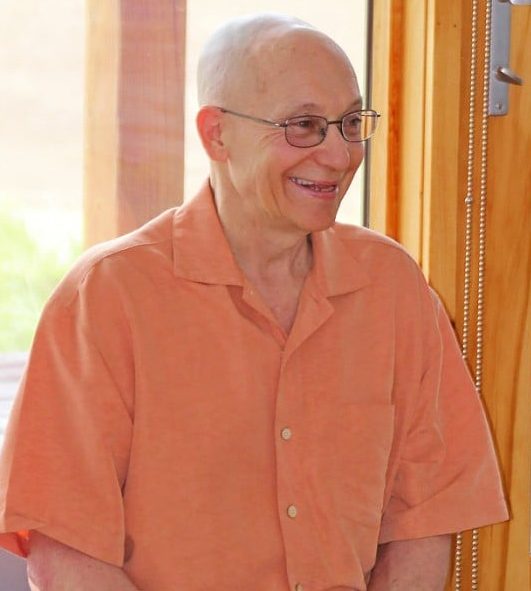 “You will succeed in truly spreading the Buddha’s Dhamma here only if you are not afraid to challenge the desires and opinions of your students. If you do this, you will succeed; if you do not, if you change the teachings and the practice to fit the existing habits and opinions of people out of a misguided sense of wanting to please them, you will have failed in your duty to serve in the best way possible.” (Ajahn Chah 1979)

Hi, I am John Haspel. I teach the Dhamma and I write on the original teachings of the Buddha. Since October of 2009, I have been teaching weekly Dhamma classes within the framework of the Eightfold Path in Frenchtown New Jersey, and other locations in Pennsylvania and New Jersey. I also teach the Dhamma individually in person and online.

I am also a recovered alcoholic and drug addict.

I am the author of three books, Becoming Buddha – Becoming Awakened, The Truth of Happiness and The Spiritual Solution.

Information about my books is here: John Haspel’s Books

At an early age I became disappointed, unsettled and confused with my life. The purpose of life seemed to be the acquisition of things and superior labels. External phenomena such as gender, skin color, religious and political beliefs, body type, scholastic achievements, financial status, and an almost endless list of temporary states appeared to define a person’s value and usefulness. Life was uncertain and nothing could bring certainty.

The competitiveness for the acquisition of things and superior labels seemed pointless and rife with struggle. No achievement or acquisition could bring lasting peace and happiness. I often blamed myself for my confusion and growing frustration.

While in an alcohol and drug rehab at the age of nineteen, a family member gave me two books that would point my thinking in a new direction. I read Siddartha by Hermann Hesse, and Think on These Things by  Jiddu Krishnamurti. While I understood little of what I read, I was able to recognize a new way to view the phenomenal world. I did not realize at the time that I was beginning to question my views of myself and the world.

I would drink and drug for another six years. Now twenty-five, and near death from the effects of alcohol and drug abuse, I took the 12 Steps of the Alcoholics Anonymous program of recovery as originally presented. One of the 12 steps, step 11, emphasizes the need to develop spiritually through prayer and meditation.

Having been brought up in a Christian household I understood prayer (or thought I did) but I had no understanding of meditation. As I knew nothing of meditation, I wanted to dismiss it. Meditation was presented to me as necessary if I was to recover, and remembering the emphasis that the Buddha and Krishnamurti placed on meditation, I sought out meditation teachers.

I first learned Transcendental Meditation and practiced the TM technique for 4 years. I became disappointed with this technique as it did not seem to be able to provide any framework for developing understanding and only a measure of concentration. The Hindu rituals and dogma loosely associated with TM created more confusion for me. The need to be able to afford the more “advanced” levels of TM, or not be allowed the teachings, seemed just another aspect of the competitiveness and “bottom line” mentality that were all part of the confusing nature of the world.

This seemed contrary to what The Buddha would teach. I had to admit, though, that after many years of “Buddhist” study I likely knew little of what the Buddha actually taught. Ultimately I left Tibetan Buddhism.

I then spent some time simultaneously studying in the Zen schools (Zen, Chan, Soen) and in the New Kadampa Tradition sect. A few years into the NKT sect I found their teachings to have little to do with the teachings of the Buddha. The NKT seemed to have their own contrary philosophy by professing worship of a worldly deity, Dorje Shugden, and an intense hatred for the Dalai Llama. Neither seemed consistent with the Buddha’s teachings.

I then put my efforts into the various Zen schools, thinking that a less dogmatic or less mystical teaching may be more in line with what I could use to develop understanding. After extensive study, sesshin’s, and diligent practice, I found that I was still not developing understanding or finding anything that would likely lead me to understanding. I found nearly as much dogma and nearly as much mysticism in the Zen schools. Dependent Origination and The Four Noble Truths seemed to be treated more as an anachronism rather than the defining understanding of the Buddha’s teachings.

I also studied in the Shambala and Triratna “traditions.” Even then the whispers of drug abuse and sexual abuse by the founders of these schools, and the dismissal of these allegations by the organizations themselves was troubling. I questioned how the founders of these schools could teach something that would allow for such brutal and hurtful behavior, and be so easily dismissed by the followers. Something was obviously missing from these teachings, no matter how popular they were.

I came to understand through the Buddha’s Dhamma that it is the nature of a mind rooted in ignorance of Four Noble Truths to fabricate subtle but very powerful strategies to continue to ignore ignorance.

In these later-developed schools, it was first necessary to learn the dogma, rituals, and methods of each school, no small matter, and then engage with their particular teachings for “many lifetimes” in order to gain any understanding. There exists a subtle, and often not so subtle, elitism within most of these schools. I came to understand that the Buddha did not teach any of these individual or cultural embellishments as part of his Dhamma, and nothing that would support the nearly universal hierarchical elitism so prevalent in all these schools.

After careful and intensive study, I became convinced that these later schools would not be able to develop in me the Buddha’s stated goal of release from all views rooted in ignorance of Four Noble Truths, and the resulting stress and suffering. [1]

I then looked to the Theravadin school. I found much of what I was looking for in “the teachings of the elders” but I found that the mystical aspects and reliance on the Abhidhamma still practiced by many Theravadins confusing and not helpful to developing understanding. I found the modern “Vipassana” movement, considered a sub-school of Theravada, to be stripped of most of the Buddha’s original teachings in favor of an extensive and hybridized meditation technique.

This was my experience. Many people have gained a measure of belonging and comfort from all of these schools, and the many other modern “Buddhist” schools.

Many years of extensive study and practice left me more confused and frustrated. I had put in the time and studied with many of the foremost teachers. I read the writings of all the great Mahayana teachers. Yet I was more confused as to what the Buddha taught then when I first began studying the Dhamma 25 years prior.

I decided that I would try to separate what the Buddha likely taught from what developed later. I learned that the original teachings of the Buddha were still available and preserved in the Sutta Pitaka, the second book of The Pali Canon. [2] I learned that the Hinayana form of Buddhism was more consistent with the original teachings than the later-developed Mahayana teachings.

As I studied the Pali Canon, in particular, the translations of Thanissaro Bhikkhu and the books by Bhikkhu Bodhi, it became clear that the Buddha taught that he was a human being who, through his own efforts, “awakened” to the truth of the origination of all manner of confusion, deluded thinking, and ongoing stress and unhappiness. As preserved in the Sutta Pitaka, Dependent Origination [3] clearly shows that it is ignorance of Four Noble Truths that forms the requisite condition for confusion, deluded thinking, and ongoing suffering to arise. When I finally understood that everything the Buddha would teach for his entire forty-five-year teaching career was taught in the context of Dependent Origination and Four Noble Truths, the Dhamma become useful, understandable, and immediately effective. What was required of me was to actually develop the Dhamma as an awakened human being actually taught his Dhamma

I found that if his Dhamma was engaged in wholeheartedly, the Buddha used the word “ehipassiko,” (come and see for yourself) any human being could develop an understanding of dukkha and experience the cessation of confusion, delusion, and suffering.

The path he taught was an Eightfold Path of developing heightened wisdom, virtue and concentration. The Buddha taught that nothing needed to be taken on blind faith.

The Buddha taught that with conviction arising from a basic understanding of the Four Noble Truths, a “Right View” of the world could be achieved.

I found that there were no special rituals, chants, initiations or empowerments taught by the Buddha that were necessary to develop understanding.

I found that there were 12 causative links, known as Dependent Origination, that simply and directly describe how suffering arises from ignorance of the Four Noble Truths. I found the Buddha’s Dhamma developed very specific insight into Three Marks Of Existence. [4]

I found that what I had previously thought of as my “self” was an impermanent and insubstantial creation of my own ignorance. This “self” was a composition of 5 psycho/physical aggregates – Five Clinging-Aggregates – that cling together, and cling to phenomena. It is these Five Clinging-Aggregates [5]that I have projected a doctrine of self onto and into, and it is this impermanent “self” that is prone to confusion and suffering.

This cleared much of the confusion of other teachings that taught a continued doctrine of self within a cosmic environment and inter-dependent and interconnected to (clinging to) other conditioned objects.

I found that I did not have to reconcile my understanding of the Buddha’s teachings with every other philosophy or “spiritual” teaching, “Buddhist” or otherwise. I developed this understanding by learning that the Buddha felt no such compulsion to reconcile the Dhamma to the prevailing beliefs or religions of his day. I found that the Buddha did not concern himself with having to prove through magical, mystical, scientific, or any other means, the truth of his Dhamma.

Here is an article of the confusion that often arises from the need to reconcile all the many Buddhist schools into a one-size-fits-all Buddhism:  Modern Buddhism – A Thicket Of View

I found that the Buddha taught an Eightfold Path [6] to awakening that any human being who whole-heartedly engaged with the Dhamma, as he presented his Dhamma, could, and often did awaken.

I found that the problem of suffering was due to my own need to establish and maintain a doctrine of self, and the Buddha’s Dhamma develops the understanding to abandon all views arising from a doctrine of self.

I found, through direct inquiry of the Buddha’s Dhamma, a peaceful and calm mind, and lasting peace and happiness.