On May 25, 2021, David Allen completed our Becoming Buddha Cross River Meditation Center’s Teachers Training. During our ceremony acknowledging this auspicious event, David took refuge in a human Buddha, his authentic Dhamma, and our well-informed and well-focused Sangha. 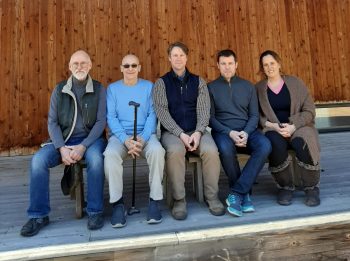 Our Teachers And Staff 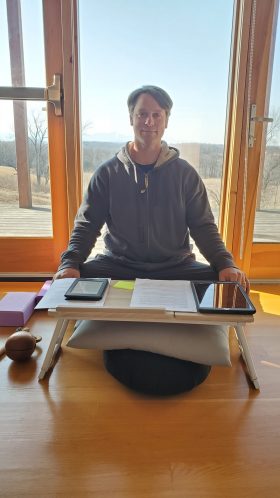 I received my BA in Religious Studies from California State University Humboldt in 2006.  I received my Master’s degree in Science, Acupuncture and Herbal Medicine from the Seattle Institute of East Asian Medicine in Seattle, WA.  I have been a practicing Acupuncturist since 2010. My experience with a sangha began at the Taoist Studies Institute in Seattle, WA, where I continue to study Taijiquan and Qigong with my teacher Harrison Moretz.  My sangha experience continued at the Center for Sacred Sciences in Eugene, OR, where I completed the Foundation studies course in 2012.

Together with John Haspel, I co-founded Cross River Meditation Center in Frenchtown, NJ in October of 2012.  Since 2012, understanding the Four Noble Truths, and the practice of the Eight-fold path within the supportive structure of the CRMC sangha has been central to my life.

The development of the CRMC sangha has led to many collaborative community events including the Dana Dinner, a community-wide potluck dinner as well as local fundraising projects involving the Homestead House, a veteran’s home, and the Raritan Learning Cooperative, an alternative High school in Flemington, NJ.

Deep engagement with the practice of the Dhamma, and now teaching the Dhamma, requests only that I accept my life as it occurs, without the need for it to be different.  The Buddha did not teach enlightenment, he taught the understanding of our contribution to the stress inherent in life, and the cessation of our contribution to that stress.  The profound teachings and practical wisdom of the Buddha are available to anyone who is interested and it is with deep gratitude that I offer them. 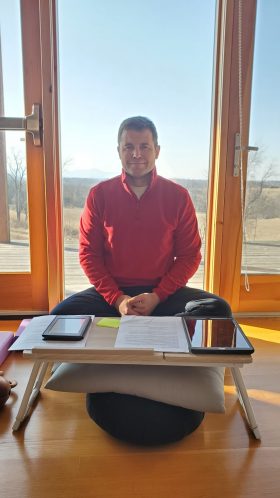 My experience with the Buddha’s Dhamma and CRMC started in 2014.  After developing a growing interest in Eastern philosophy, I was introduced to the teachings of the Buddha.  I began to meditate and attend classes and gradually began to read and study the Dhamma with the support of the sangha at CRMC.

Through the vision of our teacher John Haspel and CRMC co-founder Matthew Branham, I was humbled and honored to learn to teach the Dhamma from my own personal experience in the teachings, in 2020.  I am honored to represent the Buddha’s Dhamma, our sangha, and humbly acknowledge to be dutiful and represent, with truth, the original teachings of the Buddha. 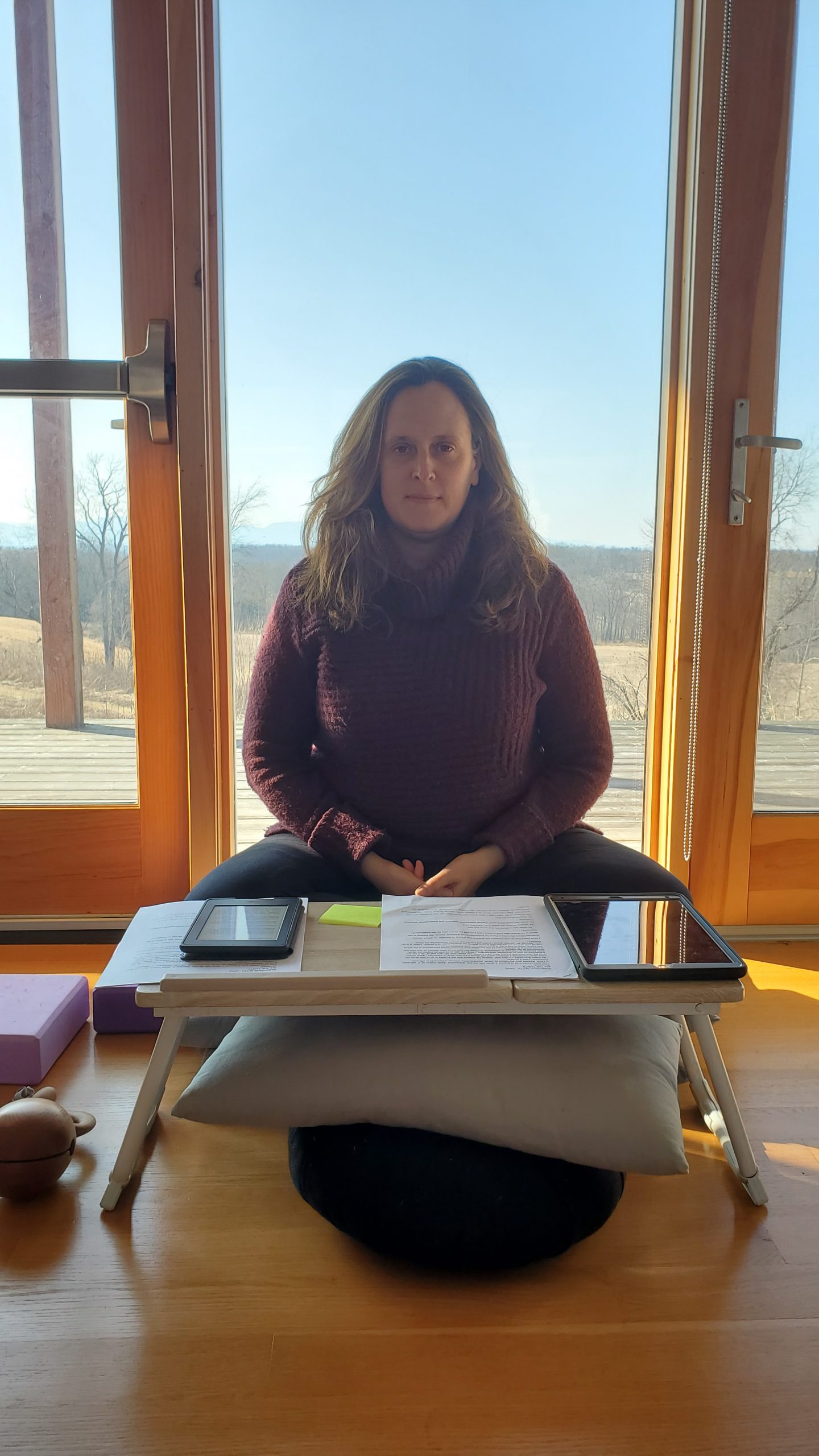 I have been practicing the Dhamma at CRMC since 2013. It has been deeply useful in eliminating stress and increasing the concentration required to navigate this hectic existence with ease and skill. I have been teaching science to children and adults since 2003, so it made sense to learn how to teach the Dhamma. It has been a rewarding experience, to say the least, and sharing the Dhamma with those who are interested brings me profound joy. 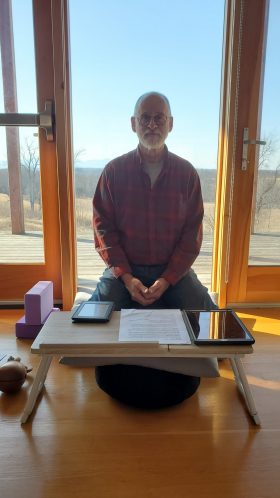 I grew up in a lower-middle-class family in a small town in the Netherlands. At age 7 I was hit by a near-fatal infection that kept me in solitary isolation in the hospital for a month, turning me into a very shy and introspective child.

In high school, I discovered that I was much smarter than my classmates and prone to questioning all aspects of the world around me. This led to a BA in psychology from the University of Utrecht in the Netherlands.

A deepening sense of unease about my supposed future (academics, career, family) and an interest in meditation, eastern spirituality and then popular Self Actualization Movement led to my “going forth from the home life”.

I ended up in India where I spent about four years in the ashram of the, then infamous, hippie guru Rajneesh ( later Osho). There I lived with growing ease in a supportive Sangha, being exposed to a minor degree’s worth of comparative mysticism.

At the dissolution of that ashram, I roamed around Europe for a while, looking for a Sangha, a practice, direction? I ended up here in the USA, where I met my wife, got married, raised children, had a career, in short: reentered the ”home life”.

Thirty years later, growing old, still looking for a practice and a way to make sense of life, somebody suggested the meditation class that John Haspel was teaching in Frenchtown.

There I (grudgingly at first) shed the degrees in psychology and ‘comparative mysticism’, overcame Doubt, Investigated the Dhamma and was embraced by the Sangha. With their and John’s example and support, I finally entered into an effective practice; the Practice of the Eight Fold Path.

My wife wondered why I would give up almost 40 years of life with our common guru but she supported the change anyhow.

Over the years my understanding of the Dhamma grew slowly, despite challenges in my meditation practice. The gaps in understanding, however, were becoming apparent.

When John proposed the teacher training program with its rigorous reading, restoring and writing, to be run together with the Vipassana classes, I realized that this would be the much-needed opportunity to ‘fill in the gaps’. Now, having met the challenge to research,  restore and comment on the Buddha’s words and present it to John and fellow trainees, I understand why the Buddha required that his bhikkhus give a short teaching in return for the alms they received.

Teaching to Dhamma is of immense benefit to the teacher, it clarifies fuzzy thinking and encourages refined mindfulness of all aspects of the Eight Fold Path. I am deeply grateful for this opportunity, John’s guidance, and the brilliant teaching and all the support and encouragement of the Sangha.

I hope my contributions will be of benefit to all. 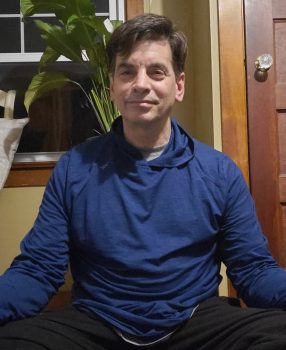 I come from an unremarkable religious and spiritual upbringing. By the time I was 7, my parents had become disillusioned with the church they both were raised in.  Despite their disillusionment, my parents both strongly identified with this religion, so they never sought to replace or seek out other spiritual avenues.  As a 7 years old boy, I was fine with that arrangement for Sunday mornings.  I was happy to replace the church with watching Speed Racer cartoons.

As a young child, teenager, young adult and not so young man, suffering was not something to examine. The momentum of life takes place.  The daily battles of works, marriage, children, happiness, disappointment,  success and failure was not understood as dukkha.  It something that was dealt with and then you move on.  Sometimes you ate the bear.  Sometimes the bear ate you.  It’s just life.  Where I was in the universe was not a concern.  The ‘bigger’ questions held no fascination for me.

I started reading John’s books in late 2016.  ‘It’s just life’ was happening more and more and Mary (my wife) saw I was in pain.  Mary was a Sangha member and John’s well-worn books were always around.  She would also always be encouraging me to try mediation and ‘just read The Truth of Happiness. Just read a little’.  So, I did.  I would grab a pillow, cross my legs and stuff myself into a corner of a room and sit.  Not exactly a root of a tree.  Then I ran into a word that set me on my path to Frenchtown, NJ.  Ehipassiko.

Come and see for yourself.  So, I did.  I read, I listened to recorded classes and eventually I met John at a Dana Dinner.

I am humbled and honored to be asked to be a teacher of the Buddha’s Dhamma.

Kaliyanamitas – Friends In The Dhamma 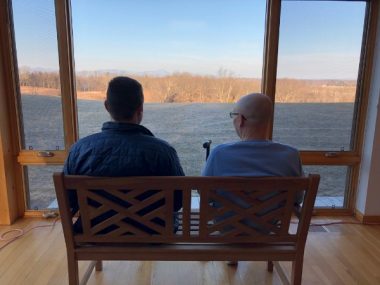 Kevin and John and a Won Sunset
Peace